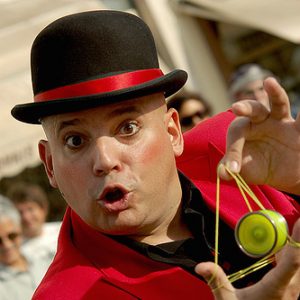 Willy Monroe of Madrid, Spain, is known worldwide for his creativity with balloons, magic, and performance. He frequently performs at festivals, conventions, and galas. Willy uniquely  integrates elements of magic, yo-yo, mime, and juggling into his balloon acts and the results are captivating.  To enhance the audience experience, Willy, though fluent in English and Spanish, typically performs (nearly) silently, using music to focus his audience’s attention on marvels before them. “On the stage, you can transmit emotions with any prop, and balloons are one of the best because as they change shape, new ideas come to life. When you inflate a balloon, it’s a snake. If you twist, you have a guitar. But if you twist again, you have a swan. The emotions for the audience go from a snake to a swan with a lot of images in between. Now, if the performance is with the correct music, a costume, a nice smile, then the balloon magic works again!”
Here in the United States, Willy frequently performs at the Magic Castle in LA, as well as Monday Night Magic in NYC. Please contact us to bring Willy Monroe to your event as well.

Here are some pictures of Willy in action

Willy Monroe designed balloons for this film, titled “On My Mind” by Burbuja Films and starring Marta Hazas and Agustín Ruiz: https://www.youtube.com/watch?v=l9jGq-o3wbk

“Willy Monroe continues to use his creative genius to develop signature effects in the Magic and Ballooning industries. He has earned his status as a respected performer and teacher by showcasing balloon art combined with stage performances that WORK. Willy Monroe has been the reigning champion of the stage for nearly half a decade at the international balloon conference Twist and Shout. His showmanship is magnetic. His balloon work is top notch. Willy Monroe has broken into and helped define the genre of true stage performance using balloons. If you get the chance to share in his creativity and energy, DO IT.” – Gus Davis, T Myers Magic Inc

“Willy Monroe is an amazing performer! He has both taught and competed at our International balloon convention, Twist & Shout. All of his performances are captivating, Willy’s love for performing shows in all his routines. Willy can capture an audience’s heart with both his magic and his balloons, but when he combines both, that’s when his art rises above most other’s with emotional impact, laughter, joy and delight.” – Patty Sorell